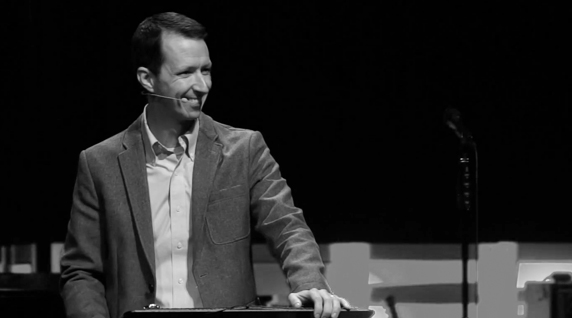 Trent Hunter, married to Kristi, father of five, and Pastor for Preaching and Teaching at Heritage Bible Church in Greer, SC.

The name for this site grows out of the conviction that Jesus Christ is presently reigning over all things, and that it is the privilege of every Christian to live under his rule. Consider that a word search through Scripture for “all things” calls up some of the most Christ exalting passages in all the Bible.

Years ago I noticed that the passages in Scripture that focus on Jesus Christ’s authority and plans are the same passages that give meaning to everything else in the universe.

He is the Alpha and Omega. Everything is under his feet. He is exalted above all things.

My little part in his grand scheme is to teach and preach as a local church pastor. Collected here are the various things I’ve written and said in service to Christ and his church.

Christ from Beginning to End: How the Full Story of Scripture Reveals the Full Glory of Christ, co-authored with Stephen J. Wellum (Zondervan, April, 2018)

“Thinking Theologically About Racial Tensions eBook” (April, 2021)
—A forward by the elders at Heritage Bible Church for an eBook written by Kevin DeYoung

Give to God What Is God’s: Three Rules for (Political) Engagement (November, 2020)
—Heritage Bible Church

“Romans in the Shadow of the Reformation” (March, 2017)
—The Gospel Coalition

“What I said to my state’s legislators about assisted suicide” (March, 2017)
—Ethics and Religious Liberty Commission

“Why Study the Book of Joshua?” (August, 2016)
—Crossway Books Blog (also at Crosswalk)

“Marriage, Gender, Hell’s Gates, and Your Church Documents” (July, 2016)
—Canon and Culture, a Project of The Ethics and Religious Liberty Commission of The Southern Baptist Convention (related interview at Terry Mattingly’s On Religion here)

“A Prayer for Nations, Our Nation, and God’s Holy Nation” (July, 2016)
—The Ethics and Religious Liberty Commission of The Southern Baptist Convention

“The Spiritual Gift You Don’t Notice Until It’s Gone” (May, 2016)
—The Gospel Coalition

“Resources for Pilgrims in a Strange Land” (May, 2016)
—The Gospel Coalition

“Troubled and Trusting: A Sunday Prayer after the Supreme Court Ruling on Marriage” (July, 2015)
—The Ethics and Religious Liberty Commission of The Southern Baptist Convention

“Resources for Assembling Under the Word” (May, 2015)
—The Gospel Coalition

“God at Work in Albuquerque and the Southwest” (March, 2015)
—The Gospel Coalition

“The Importance of Contentment” (March, 2015)
—ExploreGod.com

“Did God Actually Say? Hearing God’s Voice on Homosexuality From the Storyline of Scripture” (May, 2014)
—The Journal of Biblical Manhood and Womanhood

“Resources for Wrestling with Contentment” (April, 2014)
—The Gospel Coalition

“I Hope My Son’s Life Is in Danger” (February, 2014)
—The Gospel Coalition (also at ChurchLeaders)

“Why Are We Against Abortion?” (November, 2013)
—Desert Springs Church

“A Deeper Look at What the Bible Says About Who God Is” (June, 2013)
—ExploreGod.com

“Resources for One-Anothering the Word” (May, 2013)
—The Gospel Coalition

“The Bible Eater: A Plan for Feasting on Christ” (December, 2012)
—The Gospel Coalition

“Resources for The Cross-Shaped Christian Life” (March, 2012)
—The Gospel Coalition

“What Does the Bible Really Teach about Homosexuality?” (November, 2015)
—The Journal of Biblical Manhood and Womanhood

“Churches Partnering Together: Biblical Strategies for Fellowship, Evangelism, and Compassion” (September, 2014)
—Books At A Glance

“Church Elders: How to Shepherd God’s People Like Jesus” (September, 2014)
—The Gospel Coalition

“Missing Jesus: Finding Your Life in His Great Story” (June, 2014)
—The Gospel Coalition

“Finding a Vision for Your Church: Assembly Required” (February, 2014)
—Books At A Glance

“A Neglected Grace: Family Worship in the Christian Home” (September, 2013)
—The Council for Biblical Manhood and Womanhood

“Salvation and the Sovereignty of God” (October, 2018)
—The Greenville Conference on Reformed Theology

“Christ from Beginning to End” (March, 2018)
—Clarus, the Southwest Regional Conference of The Gospel Coalition

“Building Lives with Sexual Integrity” (May, 2015)
—A Saturday Seminar for Desert Springs Church

“How Can We See Christ from the Book of Joshua?” (August, 2014)
—A Saturday Seminar for Desert Springs Church